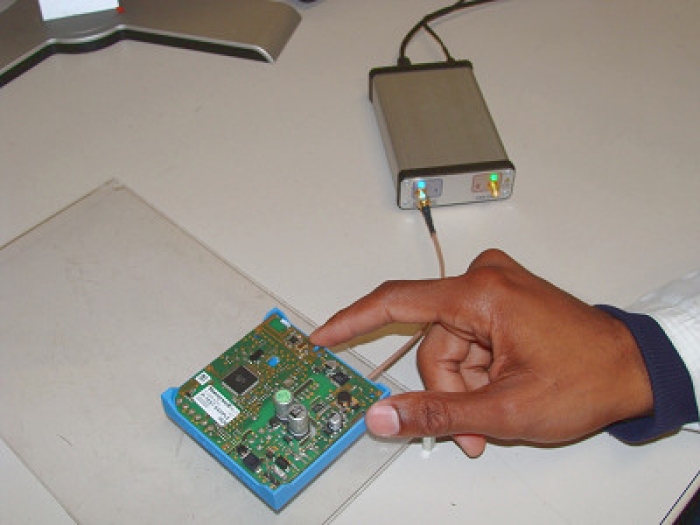 Antenna test fixture in use at Honeywell

Although a very good design will help to achieve high yield on antenna performance, batch to batch tolerances in PCB and components can suddenly influence resonance frequencies of on-board antennas.
There is an easy way to determine the resonance frequency by wireless without having to probe electrically. Just as with the old grid-dippers

RF antennas are components that are by nature very susceptible for their environment. That is what an antenna got to do after all!

But here is a draw back to this: the performance, especially the resonance frequency, of an RF antenna can be greatly influenced by batch to batch tolerances of the PCB material and components, like capacitors, inductors and ceramic antenna. PCB material turns out to be a recursive problem for many of our customers because putting very tight tolerances on the PCB-production process and materials is very expensive.

Most of the time all goes well, and then suddenly the yield in a new batch of products can be too low. This is not very nice to encounter after you've assembled 10k+ boards! If you've had known all this in advance, you've could have tackled the problem by just changing that one small tuning capacitor. 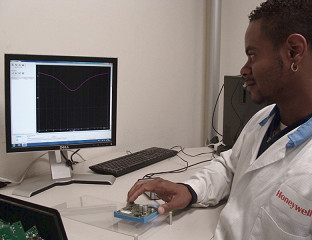 MegiQ worked with Honeywell to tackle a problem with antenna yield. Although the design and production processes at Honeywell are very well controlled, for a particular design they had to make a trade-off between paying for tight tolerances or having the chance to have more rejects in a batch every now and then.

The idea is to measure the resonance frequency of the on board antenna at a low sample size prior to make the big run. In first instance that was done at assembled boards, but later on it appeared that in many occasions this could already be done on bare PCB boards. Almost every on-board antenna needs some kind of matching and after determining the influence of one of the matching component(s) on resonance, it turns out to be very simple to predict the right value once you measure the actual resonance frequency of the antenna on the bare PCB before assembly of the boards.

Most of the time that would be the value that had been designed during R&D. Just a few times a year they have to change the value of just one reel of capacitors on the P&P machine.

We described the contactless measurement in a previous article. The idea came from using the old grid dipper. That is an instrument that can measure resonance frequencies of passive circuits. This is done by coupling the field generated by the instrument into the field of the passive circuit. Thus it is completely contact-less. As long as you do not couple too tight, you do not influence the system under test.

Grid dippers are outdated, read-out is difficult and they are not accurate enough for the purpose we are aiming at now. But a VNA would be a very nice instrument if you would combine it with a fixture that would couple one port of the VNA with the antenna on the board under test.

The coupling is done with a non-resonant induction loop. The size and the placement of the loop depends on the frequency and the topology of the antenna and PCB. This is not one size fits all, you will need a fixture per type of product anyway, because it is very unlikely that all dimensions of the PCB of all your products are the same. 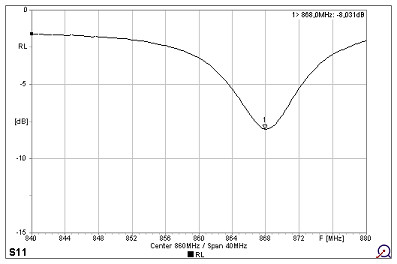 MegiQ designed and printed a very simple test set-up for Honeywell in their production process of wireless climate control products.

Until now MegiQ has designed and produced several test fixtures with pick-up antenna for this purpose that allow reliable measurements on several types of antennas, Loops, monopoles, dipoles, PIFA on all kinds of bands. However, not all antennas and designs are suited for this technique. 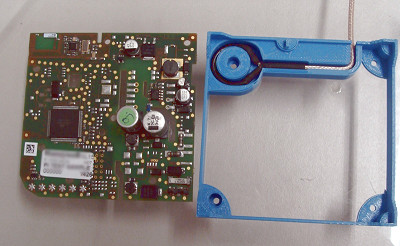 If you would like do design your own fixtures, take care of the following points:

You can also outsource this design to us. Of course we need your product to be able to design the fixture.

When just checking a few samples every batch of new PCB's, you can just use the user interface software that comes with the MegiQ VNA. It is very handy in use, you can store the complete settings of the instrument inclusive calibration, and recall the right setting for every one of your products. The system remembers also markers, so readout is easy.

But if you want to collect data on many boards, you can completely automate the process, by using the API that comes with the VNA and writing your own application. If you want with Go/NoGo decision making and interfacing with the production line.

More in this category: « Wireless Luminaires UFL Connectors in VNA Measurements »
back to top