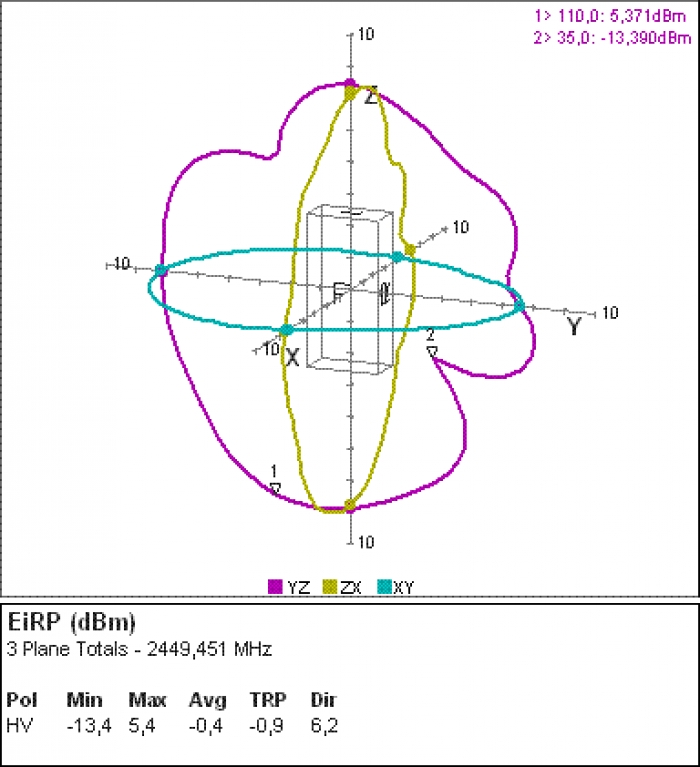 For many Wireless Devices the Total Isotropic Sensitivity (TIS) can be derived from Total Radiated Power (TRP) together with the transceiver properties.

Many modern wireless specifications require the Total Radiated Power (TRP) and Total Isotropic Sensitivity (TIS) of a wireless device to comply to a certain class of devices.

The TRP is measured by measuring the radiated power at many points around the device and sum the values to the total power radiated. 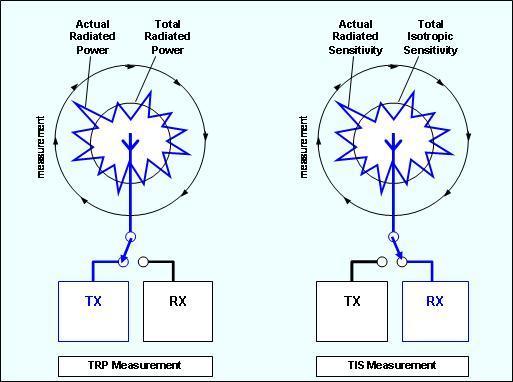 Radiation patterns are integrated for TRP and TIS

Many developers turn to test laboratories for these measurements but there are alternatives. With a substantial budget there are different kinds of test chambers (BlueLab, Satimo) available that can perform the TRP and, with optional components, also TIS measurements.

The MegiQ Radiation Measurement System (RMS) is capable of performing TRP measurements at a fraction of the cost but with similar accuracy. When the properties of the RF transceiver (chip) are known or measured, the TIS can be derived from the TRP results with only one additional, non-critical, sensitivity measurement.

Wireless devices are usually part of a larger system that involves fast microprocessors, displays and switched power supplies. When the antenna is integrated in the device the other components can create significant amounts of in-band interfering noise that is picked up by the antenna. This raises the effective noise floor and impedes the receiver sensitivity. This is often a significant problem for devices that operate below 1.5GHz but the problem can also occur in the Wifi band.

The internal noise causes a degradation of the sensitivity and this is the main reason why the TIS is such an important number. It expresses the actual sensitivity under the working conditions of the device. 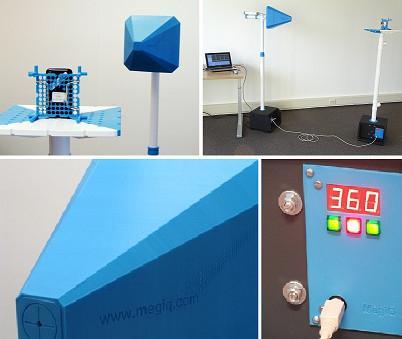 Relationship between TRP and TIS

The signal in a certain direction is amplified by the gain of the antenna in that direction. If the gain is greater than 0dB the signals gets amplified, otherwise it is attenuated by the antenna. Both TRP and TIS depend on the same antenna gain.

‘Isotropic’ means that the device is compared to a theoretical Isotropic radiator, an antenna that radiates the same power in all directions. Its radiation power is a perfect sphere. This is a standard antenna and has a gain (in all directions) of 0dBi. The ‘i’ indicates that the number compares to the Isotropic radiator, but it is often left out.

A real world antenna will always have a directional character and the gain in some directions is greater than in other directions. The TRP (it is also called Total Isotropic Power, TIP) is calculated by integrating the radiated power over a sphere around the antenna and this yields a power value that can be compared to that of the same transmitter connected to an Isotropic radiator.

Likewise, the TIS is calculated by integrating the sensitivity over the sphere and this yields a sensitivity value that can be compared with the same receiver connected to an Isotropic radiator. 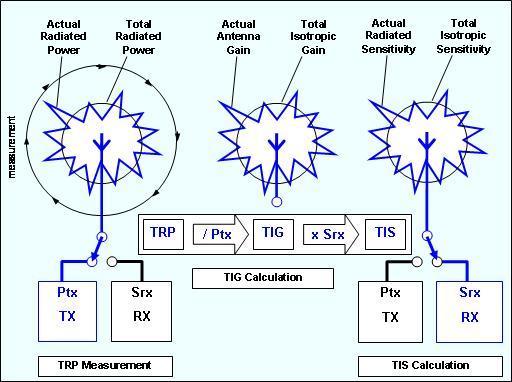 TIG and TIS can be derived from TRP

The transmit power is normally specified in the datasheet but is it better to measure it at the common measurement point. This is easily measured with a spectrum analyzer or power meter with the transmitter at its operation level.

The receiver sensitivity is more involved to measure for several reasons. First of all one must have some test setup to determine the lowest signal that can be received by the receiver. For simple protocols this can be a test device that is programmed in-house or a chip evaluation board with software. For more elaborate protocols and modulation like Wifi or CDMA a commercial test set can be used.

Most receivers are capable of reporting the signal level at the receiver input in the form of a Received Signal Strength Indication (RSSI). This value can be retrieved directly from the receiver registers, or it can be reported back to the tester through the radio protocol.

To be able to translate the RSSI level to the level at the common measurement point it is necessary to do a one- time conducted verification of the RSSI report against the actual input value. While it is difficult to verify the RSSI around the threshold level, because of the high attenuation requirements and leakage problems, it often suffices to determine the RSSI value at a much higher level. With two measurements for example at -40dBm and -50dBm the linearity of the RSSI value can be tested and the difference from the actual test level can be calculated. After this measurement the receiver should be trusted to report accurate RSSI down to the sensitivity threshold level and the calculated correction factor can then be used to convert the RSSI to actual input levels.

When the RSSI behavior is established it becomes quite easy to measure the radiated sensitivity with the device in its natural operation condition. There is no need to know the signal path over the air and through the antenna since the receiver level at the common measurement point is determined through the RSSI value of the receiver. There is no need for an anechoic environment and, if there are no interfering signals from outside, the sensitivity measurement can be done at the lab bench. It is enough to determine the RSSI value of the radiated test signal at the sensitivity threshold. This can be done by moving the device or the test antenna around to find a point where the signal is very low.

This summarizes the steps to get to a TIS figure:

For measuring against certification standards these steps should be done carefully and possible error sources should be taken into consideration. It may be desirable to measure the TRP power at a test lab and perform the remaining steps in-house.

If the TIS must be measured repeatedly during design debugging and optimization, steps 1 through 4 could be done once so that only the sensitivity measurement needs to be repeated between modifications. As long as the antenna and wiring configuration is not changed significantly the TRP should remain quite constant.

In fact, if the goal is to optimize the sensitivity then it is enough to just measure the RSSI at the sensitivity threshold and optimize this. The whole TRP and TIG measurement can be omitted. But again the antenna configuration must not be changed during these tests, otherwise the RSSI numbers can not be compared to each other.

The preceding sections assume a theoretical system. In reality there are several other matters that can cause errors in the TIS measurement.

The TIS can be derived from a TRP measurement and simple sensitivity measurements that can be performed in-house. This is very useful especially during development or problem solving because there is almost instant feedback of the sensitivity performance.