This article was also published in Microwaves & RF magazine.

Time Domain Reflectometry (TDR) is a technique that measures and displays the impedance of a network (cable, filter etc) over time. Traditionally this is done with a device that generates very fast pulses and injects them on the network, and measures the time and amplitude of reflected pulses.

This gives information about the impedance as a function of the time it takes to reflect. And, since the signals travel with (nearly) the speed of light, the time can be translated to a distance through a cable.

We can do the same kind of measurement with a VNA but in a roundabout way. A VNA measures the (reflected) impedance over frequency. We can use a Fourier transform to convert this into a series of impedances over time, just as a TDR instrument produces.

This article describes Frequency and TDR measurements of coax networks and the analysis of PCB trace impedances on a test PCB. These are some of the applications of TDR analysis.

The measurements were done with a MegiQ VNA-0460e Vector Network Analyzer.

The following graphs show a measurement of a piece of 50 Ohm coax terminated with a Short, as in the picture but with a Short at the end. 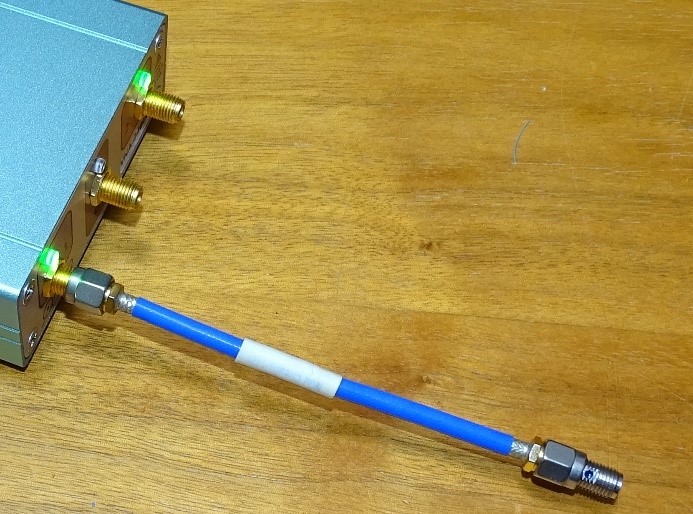 These graphs are all different representations of the same S11 measurement on this network: 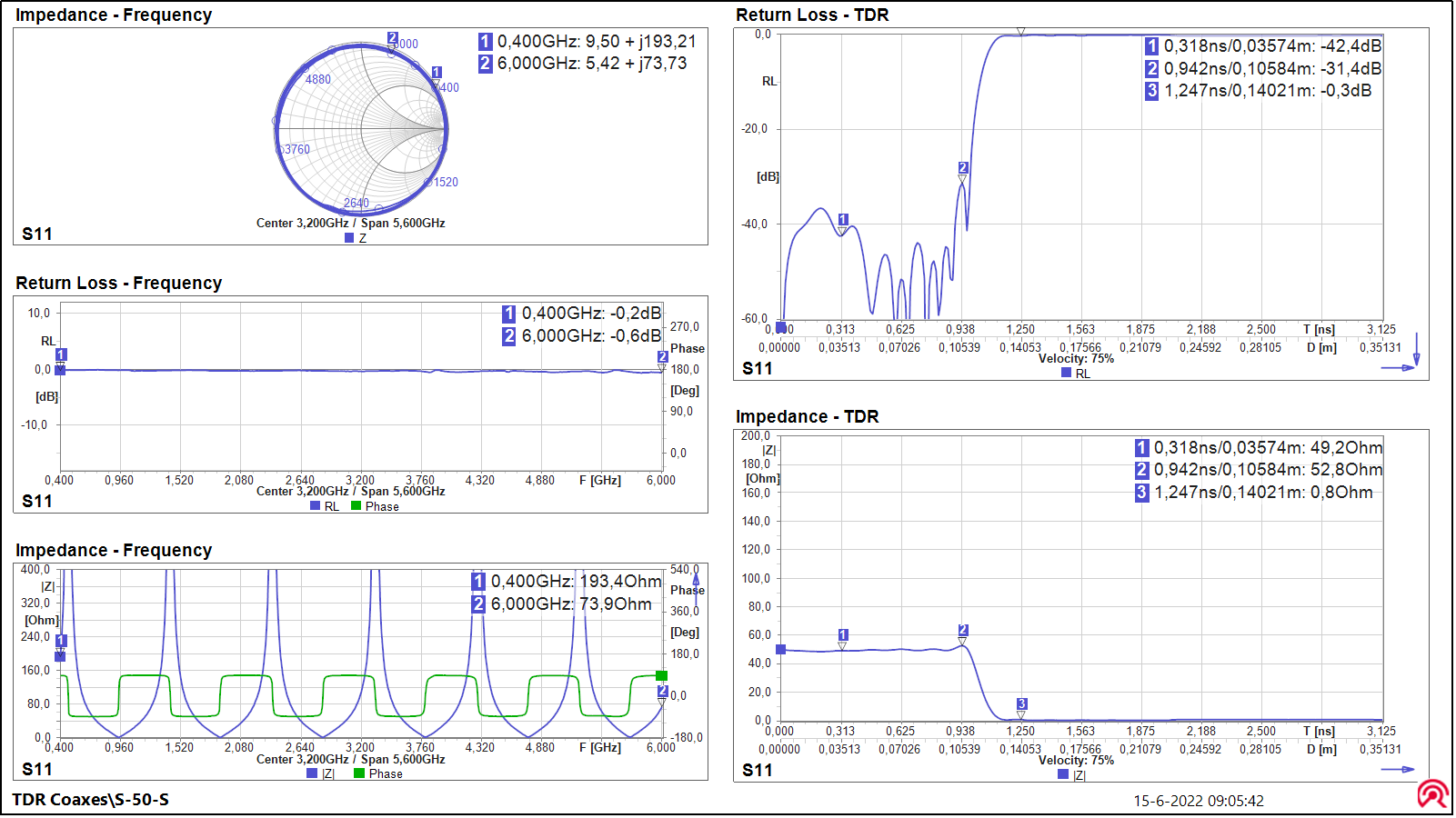 On the left are three graphs of the Impedance over frequency:

It is difficult to say something about the geometry of the network from those frequency graphs.

On the right are two TDR graphs that show the Return Loss and Impedance over time.

At T = 0 the signal leaves the VNA port. At T = 1ns (marker 2) the signal that is reflected off the Short returns to the VNA port. The signal first travels through the 50 Ohm cable and the impedance then drops to (almost) 0 Ohm of the Short.

In a coax cable, time is distance since the signal travels at nearly the speed of light.

The second horizontal axis (at the bottom) converts the time to the distance in the cable.

The TDR transformation shows the real impedance at different positions in the network. There is no phase information in a TDR signal. This resembles the characteristic impedance of a coax cable, which is also a real number.

For this reason there is no Smith representation of a TDR signal.

We can make a more interesting network with some coax creativity: 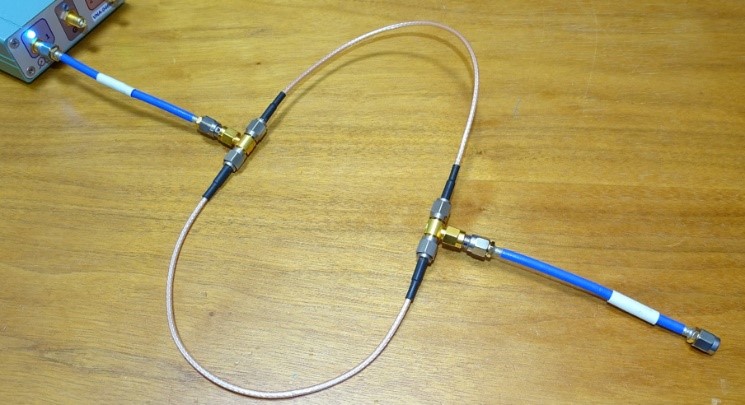 The signal travels through a piece of 50 Ohm cable, then through two parallel 50 Ohm cables (forming a 25 Ohm line) and back again to a single cable, ‘terminated’ with an Open. 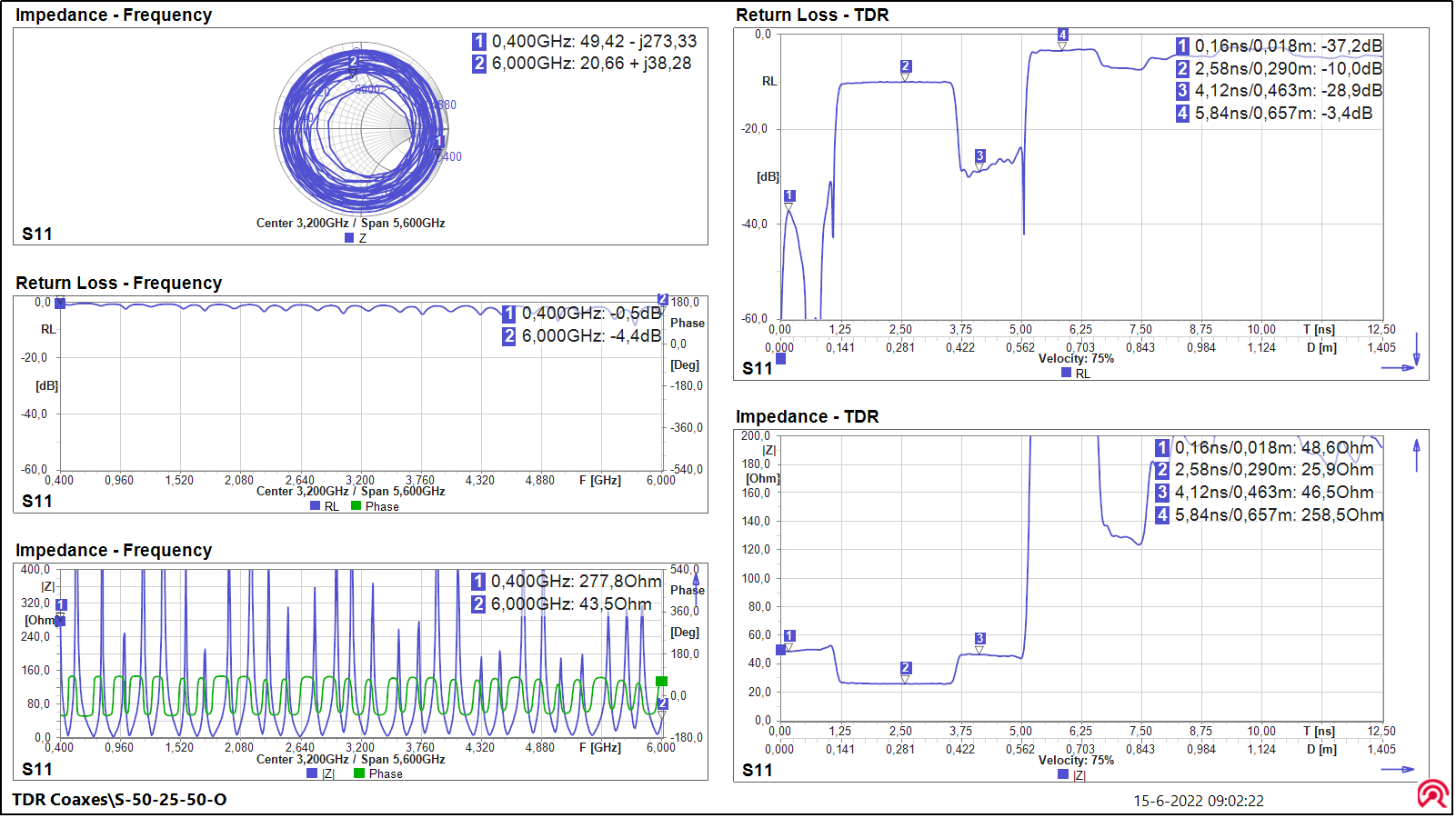 Again, the frequency graphs look spectacular but don’t give much information about the structure of the network.

In the TDR graphs on the right the impedances and jumps are clearly visible. It goes from 50 Ohm to the 25 Ohm of the two parallel cables, back to 50 Ohm and then to a high impedance at the end.

We connect a long 50 Ohm coax to the jumping network from above and do a two-port measurement.

The jumping network is made even more interesting with an additional piece of coax in one arm of the split network: 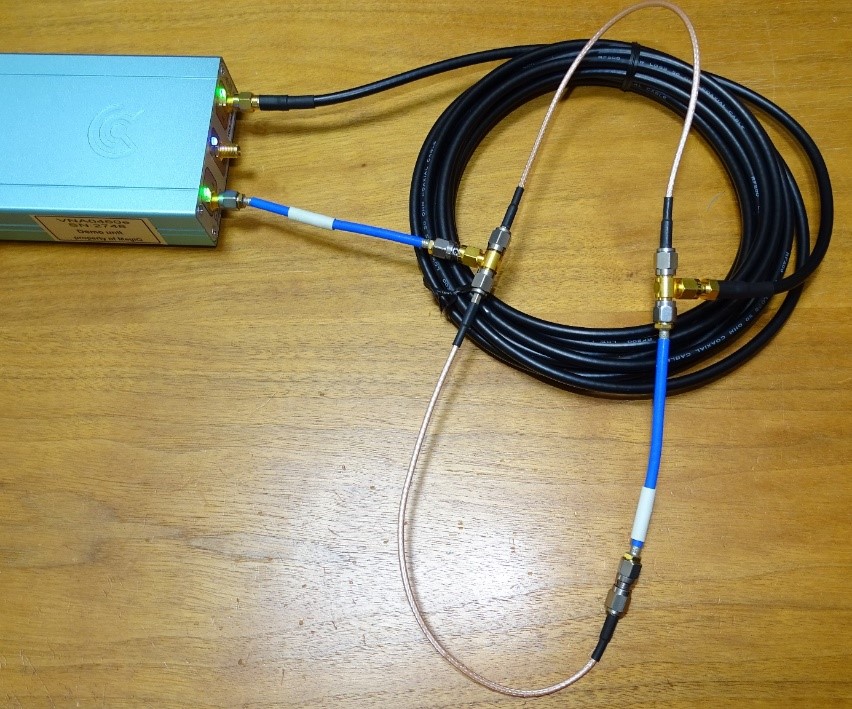 The ‘far end’ of the network is connected to Port 2 of the VNA so it is terminated with 50 Ohm. For Port 2 this is the ‘near end’.

On the left are the frequency graphs and the TDR graphs are on the right. 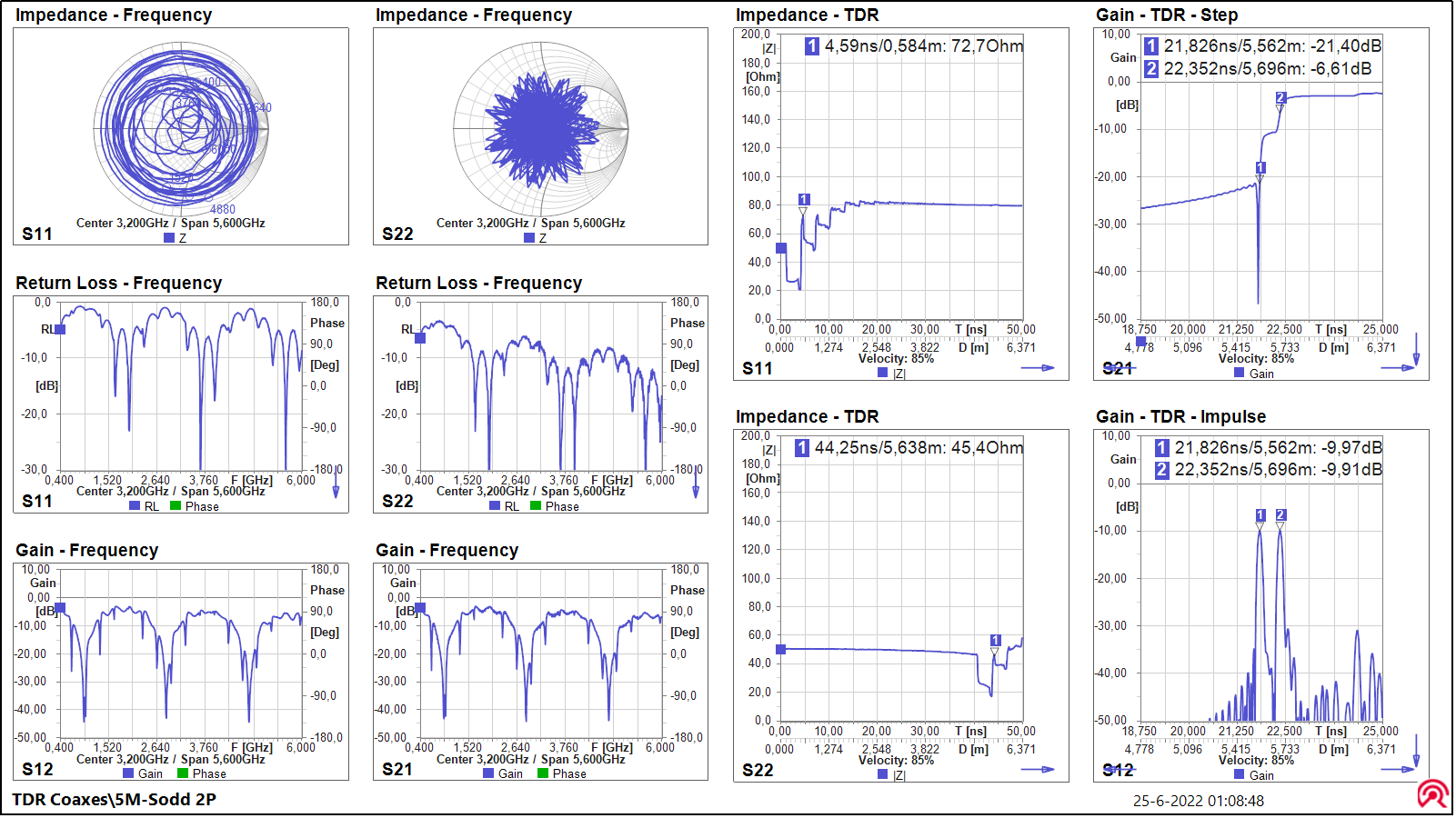 The S11 Smith chart on the left looks similar to before. The S22 Smith chart seems to have a better impedance because the mismatch is located at the end of the long coax, which attenuates the reflections.

The Gains S12 and S21 also vary wildly because of all the impedance jumps in the network. Note that the forward and reverse gain (loss) are identical, as there is no directivity in the network.

In the TDR graphs of the impedances S11 and S22 we see that the jumps are near Port 1 and far fom Port 2. The addition of an extra delay in one arm of the split part gives short extra jumps in the TDR impedance (marker 1).

This two step arrival is clearer with the Impulse mode of the TDR transorm. There are clearly two peaks in the arrival of the signal at the other end.

The dual peaks are caused by the uneven length of the two arms of the split network part.

The TDR mode can also be used for analyzing a (long) cable with a fault.

In the TDR graph it is easy to see if there are impedance jumps, like a short or open in the cable, and how far from the VNA they are. A damaged coax can show a slight or large impedance variation along its length.

It is not necessary to terminate the cable at the far end for Distance To Fault detection.

With the TDR functionality it is possible to ‘filter’ the gain-frequency graph with a filter in time.

Effectively, the VNA software can do a TDR transformation of the frequency measurement, remove signal components outside (or inside) a certain time range, and then transform the signal back to a frequency graph.

This is called Time Gating. This screen shows the definition of such a Time Gate on the TDR transformed signal. 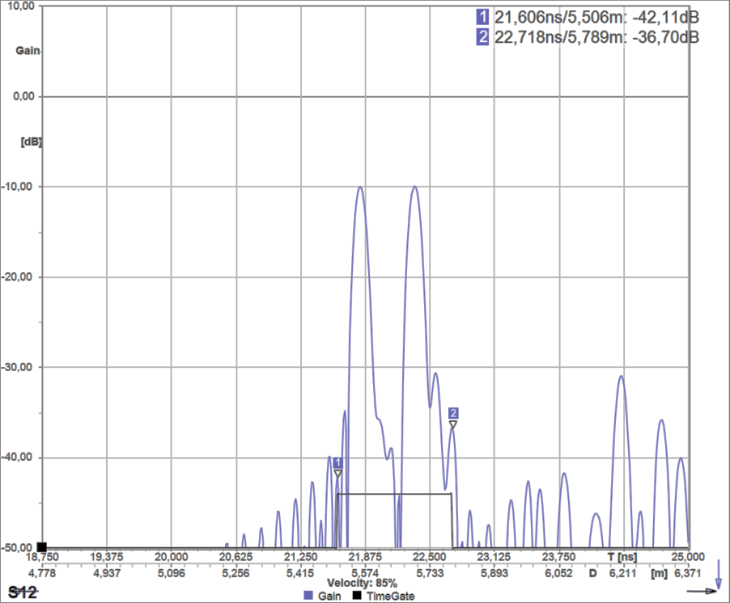 Marker 1 and 2 define a time-range and the filter is shown in black.

This screen shows the result of several Time Gates: 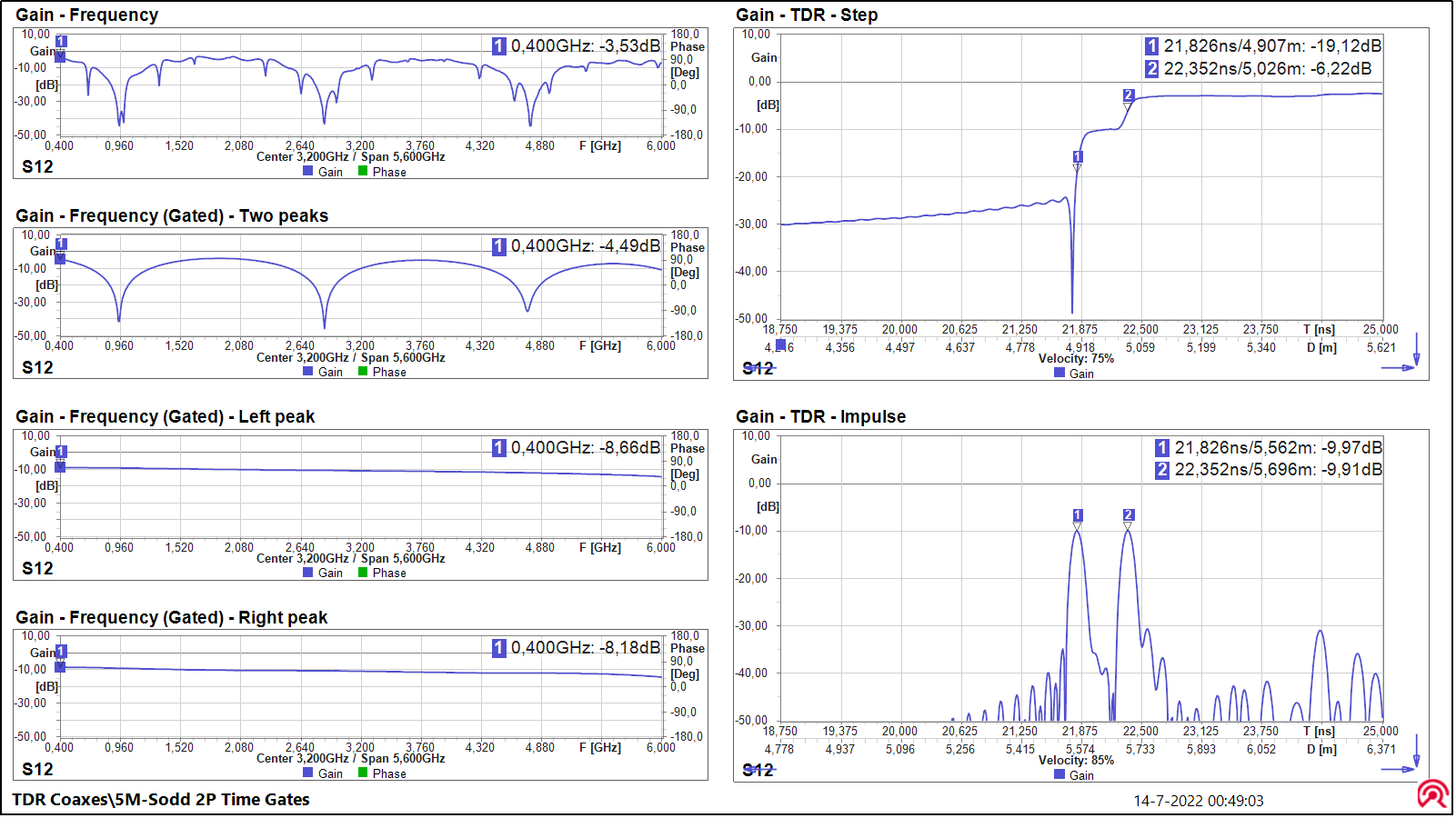 We designed a PCB with different CPWG traces and SMA launches to investigate the impedances of these geometries. The PCB is a 4 layer PCB with a top and bottom core of 254u Isola I-Tera material. The two center layers are ground planes. 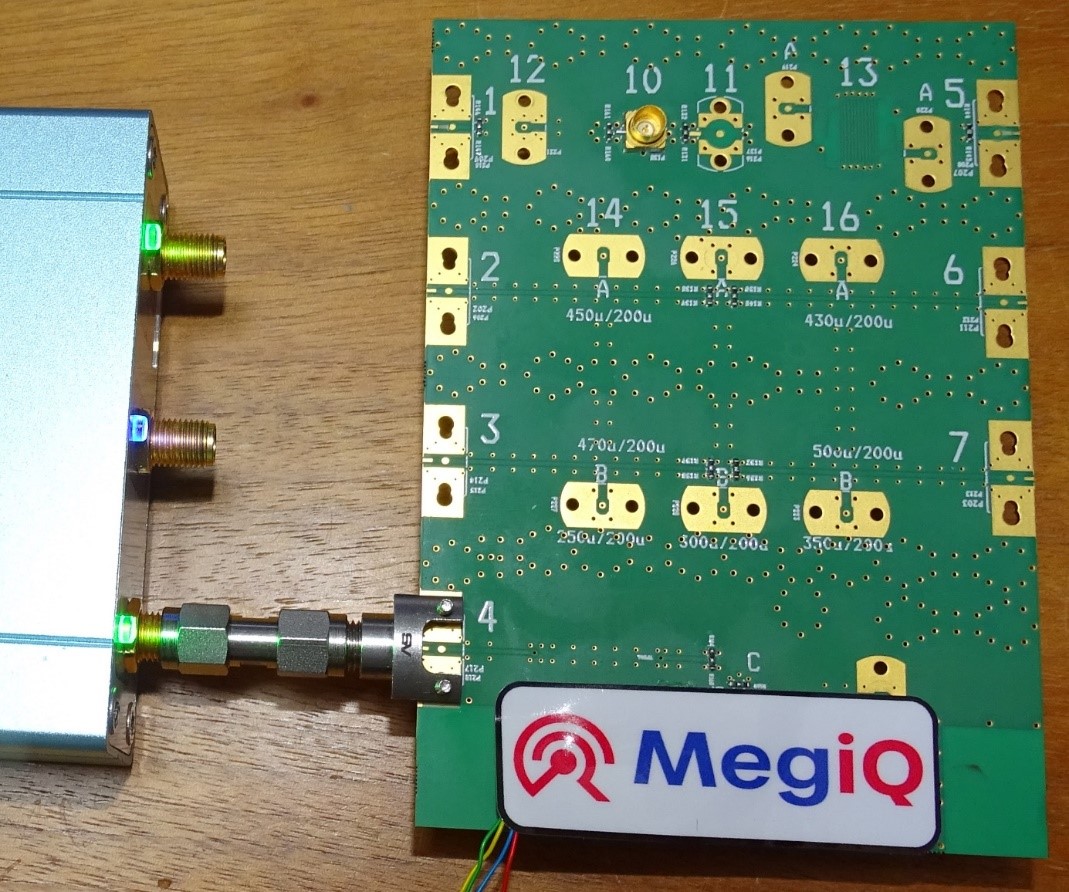 The SMA connector is a solderless type that we moved to different positions. The SMA was deembedded from the measurements to see the impedances of the traces only.

We used the enhanced TDR mode of the VNA software to get more detail of these relatively short traces.

The impedance dip at the end of the trace is due to the layout of the termination network with a wider footprint that accomodates two resistors.

The Impedance decreases with wider track widths. The track of 450u show the best 50 Ohm match.

The effect of vias

Circuit 4 was made to investigate the effect of vias. It has a trace width of 470u with two vias to jump to the bottom layer and back up again. 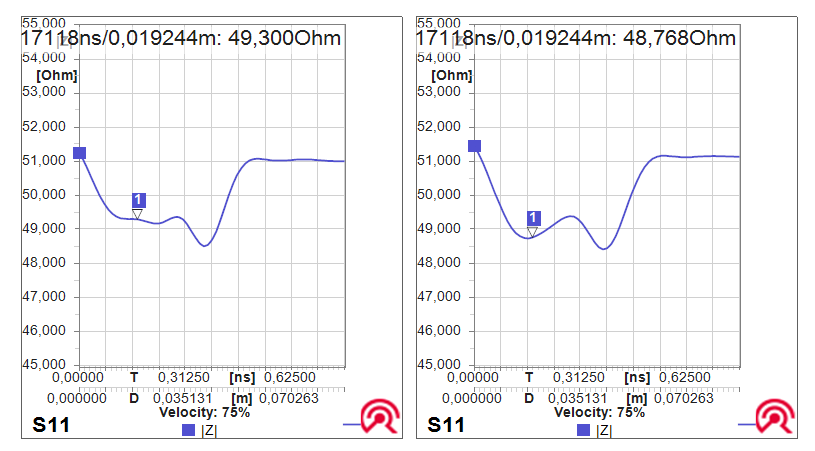 TDR is also useful to get a better insight in local impedance effects of networks.

Time Gating can be used to isolate certain areas in a network for frequency representation.