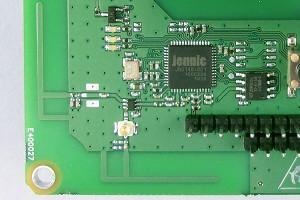 Many of the well known VNA manufacturors offer very expensive calibration kits and special phase-stable cables (which costs almost as much a MegiQ VNA) for measuring impedances. This is useful for some special scientific measurements, or when working in the higher GHz, but a setup with an uncooperative cable and a bulky (N) connector is not suited for measuring the small devices that we are developing.

At MegiQ we have a different view on measuring. We use the popular UFL connector because it is small enough to fit on most devices. And we use thin, flexible UFL cables to connect to the VNA.

The UFL connector was introduced by Hirose as the U.FL connector and became very popular for connecting RF signals in consumer electronics. There are several varieties from other manufacturors and are also known as UMC or UMCC connectors.

Because of its size the UFL setup matches much better to the size of the PCB and has a much smaller effect on the ground properties of the device.

Doesn't that affect the accuracy? The moderate mismatches that are introduced by the UFL components is mostly calibrated away during the Open-Short-Load calibration. The effects become noticable above 3GHz but even there the results are very useful.

MegiQ provides several UFL interfaces and calibration tools with OSLT calibration. They can be used whenever a PCB can be fitted with a UFL socket, even if no footprint is provided.

We also provide application notes and tutorials on how to perform UFL measurements.

You can visit VNA Sandbox and Balanced Calibration kit for more information.

RF is not Magic, it's MegiQ